The town of Colchester is in the County of Essex, 50 miles (80 km) north-east of London. It is less than 30 miles away from Stansted Airport and 17 miles from the passenger ferry port of Harwich. There are several ways of travelling to Colchester.

The nearest airport to Colchester is Stansted, one of London airports (location). If you use Stansted, take coach 133 to Colchester (timetable), it will bring you to the University campus, while going through town centre as well. You can book a ticket online (£12 single, £15 return) or buy one just before boarding (might be more expensive).

There are frequent trains from London Liverpool Street station to Colchester North station. Colchester Town station is closer to town centre and to the University, but there are fewer trains going there. Wivenhoe station might be a destination only if you are going to Wivenhoe House – do not go to Wivenhoe if you are heading to a hotel in Colchester town centre. There are also train connections to Ipswich, Norwich, Felixstowe, Harwich and more – see National Rail train timetables and fares.

A ferry service operates from the Hook of Holland in the western Netherlands to Harwich International Port, which is just 17 miles away from Colchester via A120. Train service to Colchester is also available.

The conference venue is Wivenhoe House which is the historic centre of Wivenhoe Park, the main campus of the University of Essex. Please note the link on the page which shows how Wivenhoe House should be accessed by car: via Park Rd off Boundary Rd, and not off Colchester Rd. The formal address is:

but note that the postcode is the same for the whole University, do not expect high precision from your GPS navigation system. Geographic coordinates of Wivenhoe House (copy and paste the whole line into Google to see the precise location):

If you use a bus to get to Wivenhoe House from Colchester centre, please note the two bus stops that you can use to get off the bus:

Each stop is about 10 min walk from Wivenhoe House. If you use a taxi, it is less than 4 miles from the town centre and should take about 10 min.

In addition to limited number of rooms available in Wivenhoe House, conference participants will be accommodated in the following four hotels, all in the town centre:

For those participants who will be staying at the hotels in central Colchester, coaches will be provided to the Wivenhoe House in the mornings and back to the hotels in the evenings. If you miss the coach, the bus service in town is easy to use. The picture below (click on it and it will bring up a high resolution PDF) will give you an idea about which services might be used between the points of your interest (North Station, the hotels in the centre, University of Essex (where the Wivenhoe House is): 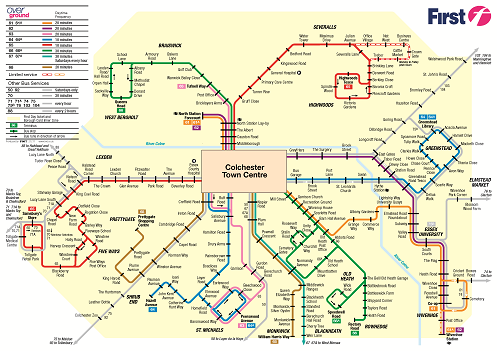 Another useful source of information about buses in Colchester may be found here. We recommend using Google Maps as follows (Chrome browser only): if you point to a bus stop symbol on the map, and then click on it, a live time table of different busses coming to the stop within the next few minutes would be displayed. You would then have an option to send the timetable to your mobile phone or tablet.