The Golden Jubilee Conference Hotel is located 8 miles (13 km) west of Glasgow in Clydebank. There are several ways of travelling here as detailed below. Please do not hesitate to ask us for any advice or guidance on getting to Glasgow.

Glasgow is serviced by two airports. The larger of the two is Glasgow Airport (GLA) a mere 20 minute drive from the conference venue. With over 100 destinations, there are direct flights from many major cities across the British Isles and Europe. In addition there are daily connections to major hubs on the eastern seaboard of the United States and Canada. There is a complimentary shuttle service in both directions between the hotel and the airport. Those entering through Glasgow airport will need to provide their arrival and departure details to the local organizers.

The smaller Glasgow Prestwick Airport (PIK) is located 35 miles (56 km) south of the city on the west coast. It is serviced by various low cost carriers from 16 destinations across Europe. A train from the airport will take 45 minutes to bring you to Glasgow Central station. Alternatively the X77 is an express service to Glasgow Buchanan Street bus station. A private taxi will set you back £49 for the journey. 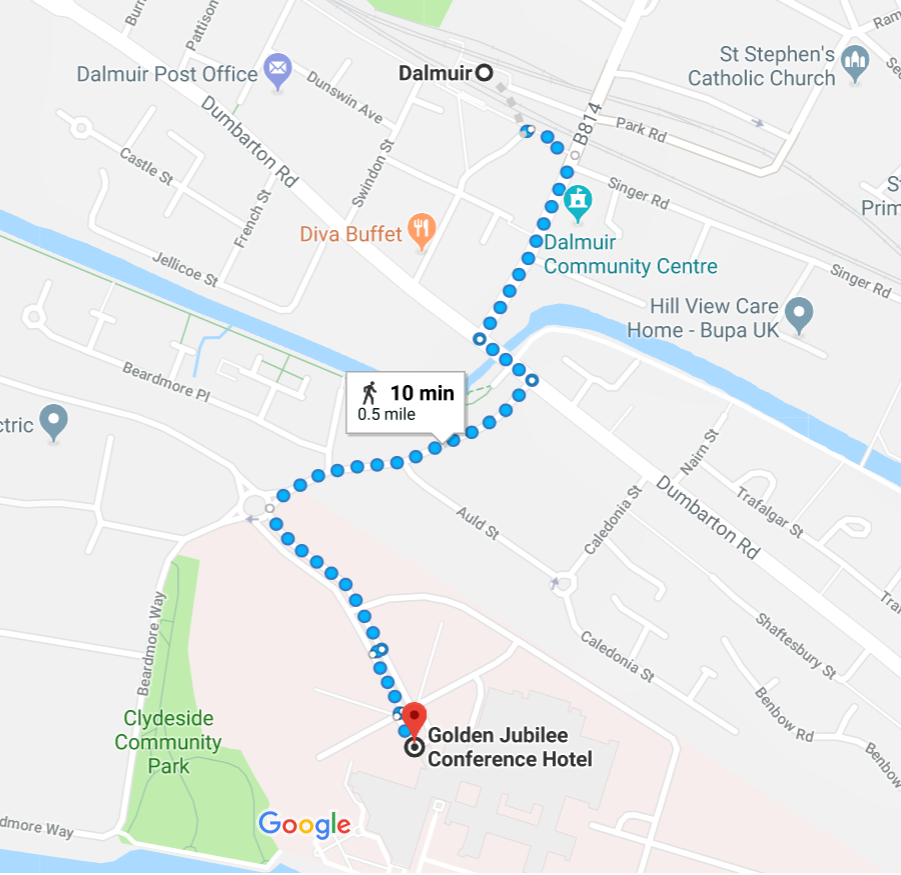 Glasgow Central station is entry point northbound trains from England along the West Coast mainline. Westbound trains from various points in Scotland and north east England arrive in to Glasgow Queens Street station. The conference venue is a short 10 minute walk from Dalmuir station. Those arriving by train are reminded to purchase a ticket to Dalmuir and change at one of the major stations in the city centre so there is no need to purchase additional tickets. For further information please visit www.nationalrail.co.uk.

Buchanan Bus Station is the main terminus for long distance coaches and is close to Buchanan Street subway station. Timetables at www.travelinescotland.com.

From Carlisle, Newcastle and the South, exit M74 on to the M73, joining the M8 at the Old Monkland junction. Edinburgh and east of Scotland drivers also use the M8 until exit 19 and follow signs for Clydebank/A814. Continuing west on the expressway it will eventually become Dumbarton Road bringing you to the Golden Jubilee hotel. Ample parking is available.