The University of Manchester 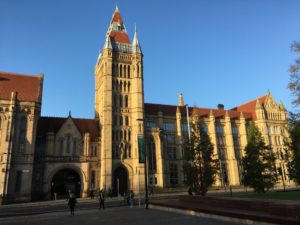 The University of Manchester is the UK’s largest single-site university, with around 6,800 academic and research staff and a student body of approximately 40,000. The university can trace its roots to 1824, and was England’s first civic university. It has a proud research history, laying claim to 25 Nobel Prize winners amongst its current and former staff and students. Famous firsts including splitting of the atom and creation of the first programmable computer. The University was ranked 33rd in the world (6th in the UK) in the 2019 Academic Ranking of World Universities. The Department of Chemistry is one of the largest in Europe, with over 80 academic staff, >140 postdoctoral researchers and >300 postgraduate research students. It was ranked 27th globally for chemistry in the QS Rankings 2018, and holds an Athena Swan Silver award for its initiatives in equality, diversity and inclusion. Manchester has a long history in EPR spectroscopy, and is host to the EPSRC National EPR Facility.

The conference, hotel and banquet venues are all within a few minutes walk of each other, and can be found on the campus map.

Manchester started life as a Roman settlement, but turned into the world’s first industrial city during the industrial revolution of the 18th and 19th centuries, even being the site of the world’s first railway station, also leading to the establishment the University’s predecessor institutions, which in turn opened the doors of education to the British working classes. The Chartist, trade union and suffragette movements can all trace their roots back to Manchester. The statues of John Dalton and James Joules that welcome visitors to Manchester Town Hall demonstrate the importance of the city to the development of science and technology and vice versa. The city has an international sporting pedigree and one of the richest and most influential arts and music scenes.

Unfortunately the conference is cancelled due to coronavirus COVID-19, but we are delighted that the JEOL student prize talks will be running on-line. A full statement on teh cancellation was released by the local organiser on 11th March.

Earlier in the year we warned of scam/phishing attempts in relation to conference registration. Unfortunately there are already malicious emails circulating in regard to coronavirus and it is only a matter of time until scams regarding refunds for cancellations emerge - please do not provide any financial details in response to unsolicited phone calls, the conference organisers will not ask you to do this.